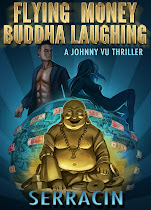 Great sensation of butterflies in the stomach over another book in the series seeing the light of day.
I have been waiting for this for a week. Bookbaby published for me again.
It should be on iBookstore for iPads, iPhones, iPod Touch shortly. Also, Sony, Kobo, Nook and a few others in the days and weeks ahead.

Don't forget, Kindle has apps for all devices, all systems. You can read it everywhere using Kindle app.
Posted by Serracin at 11:09 AM No comments:

Have been reading short stories I wrote from the early eighties. I may consider putting them out in a short collection.

They deserve the light of day, and readers like short form and free eBook content.
Posted by Serracin at 10:28 AM No comments:

Away from blogging for four months of intense editing on Flying Money_Buddha Laughing, book 2 in the Johnny Vu Thriller Series.

Also, these months have been filled with dog medical attention. Sugar, the younger of the two, has Lupus, and we have been at it for five or six months of dealing with her immune system attacking her skin. Very intense work to save her.  Lots of hourly work around the clock.  She now has grown back hair over most of the face, except the top and tip of her nose. She is on lots of drugs and that is from 6am to after dinner.

So, I have been very involved in those two major projects.

Now, today, I sent the book off to BookBaby for aggregation. Maybe in a week or so, Amazon and iBookstore, and all the rest will have it.

I feel it is stronger and carries Vu and his cohorts deeper in the search for dreams, adventure and revenge.

It will lead into the third and fourth book which is plotting out nicely in my mind from this second effort.

I'll announce it here when it is ready for purchase and download.
Posted by Serracin at 8:35 PM No comments: